Suitable for beginners and more experienced stitchers alike, tutor Angela Neilson will lead you, step-by-step, through the process of making a basic art cloth doll.

You will start by drawing out and machine stitching body parts, then turn and stuff the parts, wire the fingers, needle-sculpt the face, draw or embroider features, make a simple wig, attach the arms and legs and finally dress the character doll. Basic sewing machine skills are helpful but not essential.

A bit of creative imagination and a willingness to let go of preconceptions goes a long way because, as these character dolls emerge, they develop a life of their own – whispering to you how they like their hair and what they want to wear.

You may wish to bring your own ideas that inspire you such as pictures, photos, books, vintage fabrics, jewellery and shells. But if you don’t know where to start then Angela will bring samples of her work for inspiration. Read more about this course on our blog.

To see pictures of the course please visit our gallery

Our art cloth doll making holidays run for 5-nights from Sunday to Friday and start from £849 per person.
The above is based on single occupancy. A £100 per person discount is applied for art, craft and activity guests on a shared occupancy basis.

If you’re coming on one of our holidays and would like to bring a friend, partner, or member of your family who doesn’t want to do one of our courses, then we have you (and them!) covered. Accompanying guests can enjoy full board catering and shared accommodation with you. Please add them on at the checkout stage.

How to book
To book online, please click on your preferred date above.
For any questions or to book direct please call 01877 382 991 or email mail@gartmorehouse.com
If you have any questions, you may like to take a look at our FAQs but if you have any further queries, please contact our team directly.

Sunday
Check in is from 4pm where you will receive a warm welcome from our team.
Once you are unpacked and settled, we invite you to enjoy some tea or coffee and home baking in the lounge where you can relax after your journey.
If you have never been on a holiday like this before, we understand how anxious you may be. That’s why, come 6pm, everyone will gather in the lounge for the Welcome Talk and Meet & Greet, giving you the chance to meet both your fellow guests and your tutor before the start of the course on Monday. Your tutor will talk you through what to expect from the week, discuss what you would like to achieve during your stay, and answer any questions you may have.
From there, dinner is served at 6:30pm in the downstairs dining room.

Monday to Thursday*
Throughout the week, tuition runs from 10am to 4pm with regular breaks for tea and coffee so you can relax and have a natter with your fellow guests about everything you’ve been up to so far.
All your meals are served in the dining room.
Evening tea and coffee is available in the lounge at 9pm.

*Wednesday
After a few days of working hard on your craft, you may like to take a break and head out to explore a little bit of the local area with a scenic sail across Loch Katrine. If you would prefer to stay in the house, then you are free to pursue your craft at your leisure but please note that your tutor will not be on hand for tuition on the Wednesday afternoon.

Friday
Check out by 10am

All materials needed for the course will be provided by your tutor, however please bring your own sewing machine with you. Your tutor will bring a couple of sewing machines with her, which she will use to demonstrate on. These machines can be borrowed by students, but you will probably feel more comfortable using a machine that you are familiar with (and this also means you won’t have to wait to use a machine). 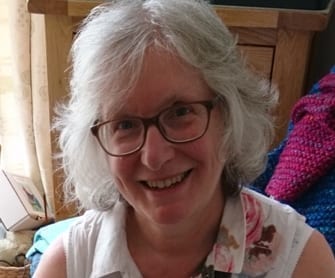 Tutor – Angela Neilson
Angela has been sewing since before she started school, thanks to her Mother and sister’s encouragement at home. Even before finishing Primary School, she had made a pair of pink and white gingham shorts on an old treddle sewing machine.

More sewing was to come at Secondary School, with memories of sewing a sleeveless cotton blouse and a pin-cord mini dress with puff sleeves! Perhaps more significantly Angela was taught Art by a Miss Tate, who introduced her to silk painting and creative embroidery. During Angela’s teenage years she made her own clothes, pencil cases, bags etc. and as a young wife and mother, continued to dress-make for herself and the children.

In the early 90s Angela was re-introduced to creative embroidery by Ness Walker at classes run by Aberdeen City Council in Westburn Park. Ness’ classes were both inspiring and disciplined – spending a week or more on one stitch and pushing it to the limits with texture and/or colour. While waiting for a space on that class, Angela spent two terms studying life drawing & painting. Ness encouraged Angela to join Aberdeen North Embroiderers’ Guild and she has been a member for over 20 years.

As a Embroiderers’ Guild member Angela has had the privilege of being taught by many of the “big names” in embroidery circles in the UK, including Isobel Hall, Maggie Grey and Jean Littlejohn. In 2011 she signed up for the City & Guilds Craft & Design (Embroidery) course at Moray College and was awarded the Certificate in 2013 and Diploma in July 2015 after a very stimulating and full, 4 years of tuition by June Hyndman, a textile art graduate of Glasgow School of Art.

Angela looks forward to sharing her extensive sewing experience and passion for art cloth doll making with you on a course at Gartmore House.

Other Facilities at Gartmore House: