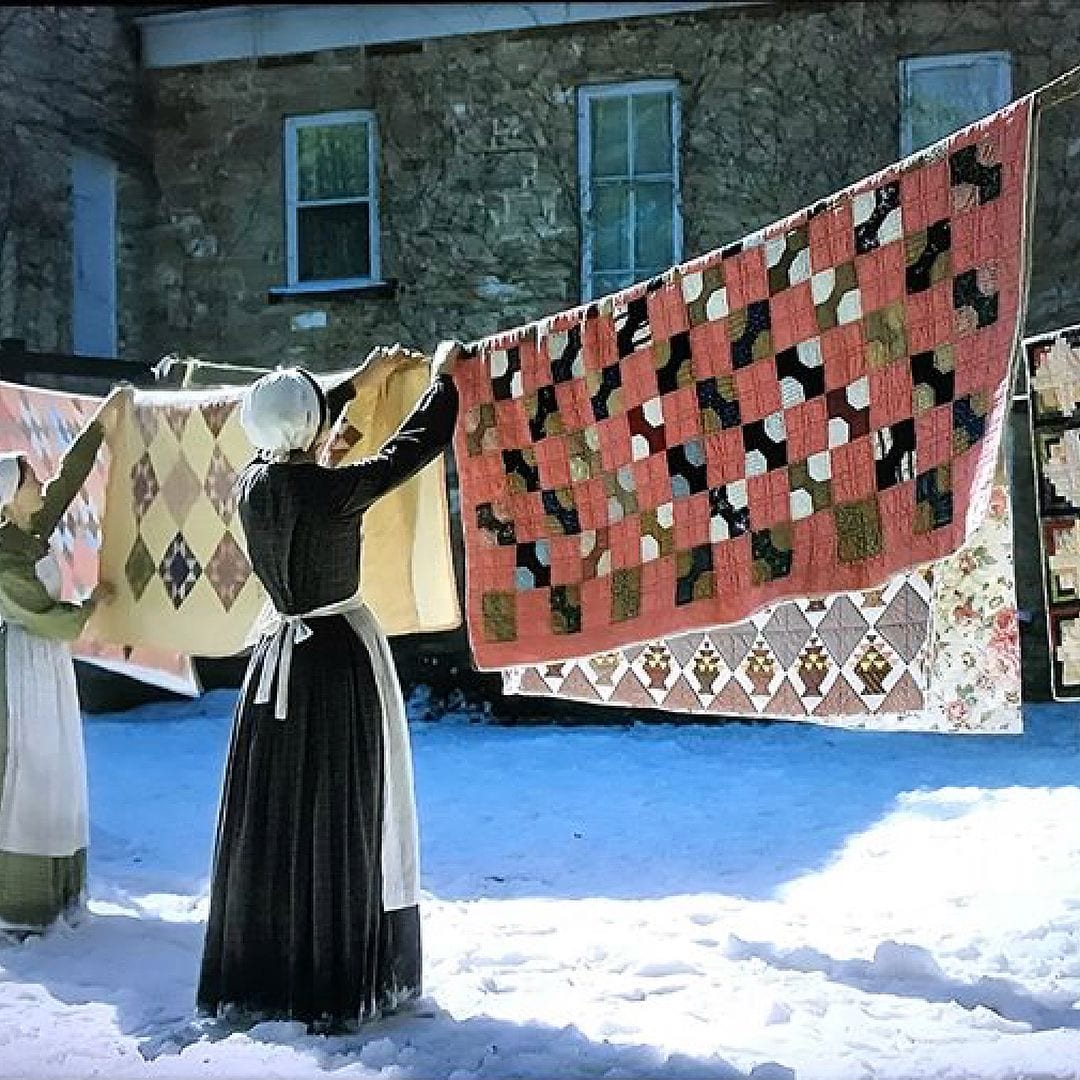 Patchwork quilts and their storytelling potential in Alias Grace

When you first start watching ‘Alias Grace’, the Netflix adaptation of the novel by the same name by Margaret Atwood, you might not expect a crafting element. Perhaps you expect a murder mystery? Or a deep dive into life as an Irish immigrant in Canada in the 1800s? But it soon becomes clear that’s there’s more to this story than meets the eye and patchwork quilts play a key role.

‘Alias Grace’ fictionalises the story of Grace Marks, a woman accused of murdering her master, Thomas Kinnear, and his housekeeper, Nancy Montgomery, in 1843. Grace is serving a life sentence when the story begins but a group of social reformers believe she’s innocent and task Dr Simon Jordan with proving it.

So where do patchwork quilts come in?

Well, from the very first episode, we see an emphasis put on patchwork quilts and sewing. During each of Grace’s sessions with Dr. Jordan, she sews, and more specifically, she sews quilts. Why does this matter? In short, the series stitches her life together. We follow her story from her immigration to Canada, through her first jobs, the murders, and everything that comes after. There’s a particular focus on her relationship with Mary Whitney, her first true friend, and Nancy Montgomery. It’s a mystery that, even by the very last episode, still has you guessing. Is Grace a ‘murderess’ or a wrongfully accused victim? We don’t know.

At the beginning, Grace sews a log cabin quilt. It’s one of the first patchwork quilts she sews with its distinctive red square in the middle. Light and dark patches surround each red square, and it is rife with symbolism in the context of the story. In many ways, it could be taken as the truth of the situation, while the white and black rectangles around it are the lies and half-truths Grace feeds Dr Jordan about her life. She stiches them together until they are inseparable and one cannot be extracted from other.

In the book, the quilt metaphor is much stronger. The narrative weaves its way between Grace’s point of view as she tells her story and Dr Jordan’s point of view as he attempts to untangle the truth, layering their present with tales of the past. In amongst this, are poems and new articles that offer yet more perspectives on the murders and those involved. Much like a patchwork quilt, these different elements are stitched together to create a fascinating whole that can’t simply be broken down into its individual parts.

Even in the series, the quilts of Alias Grace function as form of storytelling. They’re a way of preserving history, but more specifically, women’s history, since women traditionally did much of the sewing within a household. According to Grace, a woman should make three quilts before she’s married: a Tree of Paradise, a Flower Basket, and a Pandora’s Box. Although, some versions of this truism replace the Pandora’s Box with a Double Wedding Ring quilt. Thanks to its complicated twists and turns, it’s supposed give the maker all the skills she needs for running a household!

Grace spends most of the series sewing for other people. But with her release, comes the opportunity to sew her own quilt. She chooses a Tree of Paradise. Snakes twist around the edges of a huge, eye-catching tree. And in the middle, Grace uses three triangles of saved fabric that connects her with the other two most important women in her story; her friend, Mary Whitney, and the woman she may have murdered, Nancy Montgomery. She preserves their story, and her truth, in her quilt. So although we don’t find out what really happened, we see Grace take ownership of her story. Even if it is just for herself. 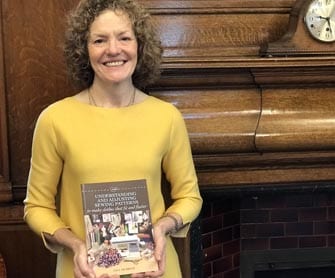 Our lovely Sewing Tutor, Gill McBride is an absolute whizz with a sewing machine. She’s the go-to guru for all things involving dressmaking and patterns. In this Q&A blog Gill shares her top tips and answers some questions about the course – we hope you find it helpful! 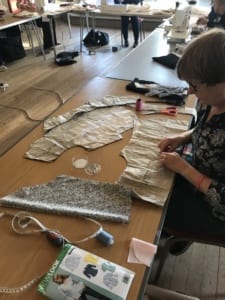 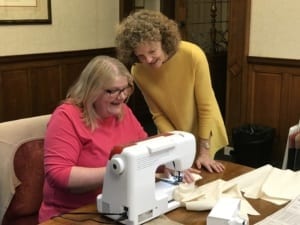 A        I just love to tailor a jacket.  Even though I use modern speed tailoring techniques, it takes quite a long time and in fact the preparation takes most of the time and the sewing probably the least of the time.  But it is so satisfying.  And because the prep work has taken so long, the sewing to me, is less likely to have to be undone and redone!  I suppose that’s because I’m really taking my time to make the jacket properly and not hurrying as I do with so many other sewing projects!!  Ready to wear jackets never fit me very well because of my shape, so the pure pride and satisfaction of wearing a jacket that fits me really well, is immense!

Q        Who are your courses at Gartmore House aimed at?
A          The courses are aimed at all levels of sewers. The beauty of the sewing holiday is that we have 4 sewing days, so there is lots of time for everyone.  So if you are not so confident with your sewing, or you don’t have a lot of experience, you will still have time over the 4 days to learn and to sew and you won’t hold anybody up. The number of people on the course is small, so I have lots of time to spend with each person at whatever stage of sewing they are at.  The only course that probably demands more experience is the speed tailoring course.  It is much more demanding and it is better suited to more experienced sewers. 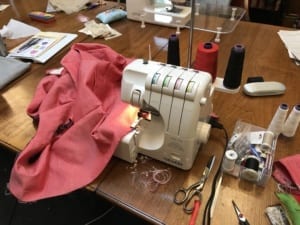 Q         What about Sewing Machines?
A          Sewing machines come in all shapes and sizes and the best advice is to buy according to your budget.  Don’t ever be persuaded to buy more than you will use.  It’s easy to upgrade at a later date, but to buy a machine and not use most of it is a pity!  At Gartmore House, I can provide sewing machines (hire is £40 for the longer course or £20 for a weekend course), and I also bring along an overlocker.  So if you can’t manage to bring a machine with you, that’s not a problem at all.  Just let me know beforehand via the team at Gartmore House, and I’ll bring a machine for you to use. And, if you’ve never used an overlocker and are curious, then you can try one out! 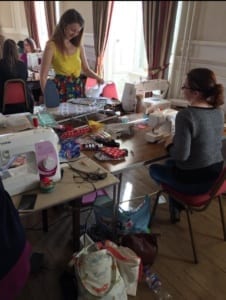 Q         What’s the best thing about a sewing/dressmaking holiday at Gartmore House?
A          Having the time to sew without distraction; having company to sew with; having someone there to help with the sewing problems and questions; having loads of laughs, loads of fun and making new friends!  I love it!
If you’re interested in joining Gill on a Sewing Patterns/Dressmaking residential course at Gartmore House, please take a look at the course webpage, give us a call on 01877 382991 or email our team mail@gartmorehouse.com – we look forward to seeing you!
#gartmoreexperience 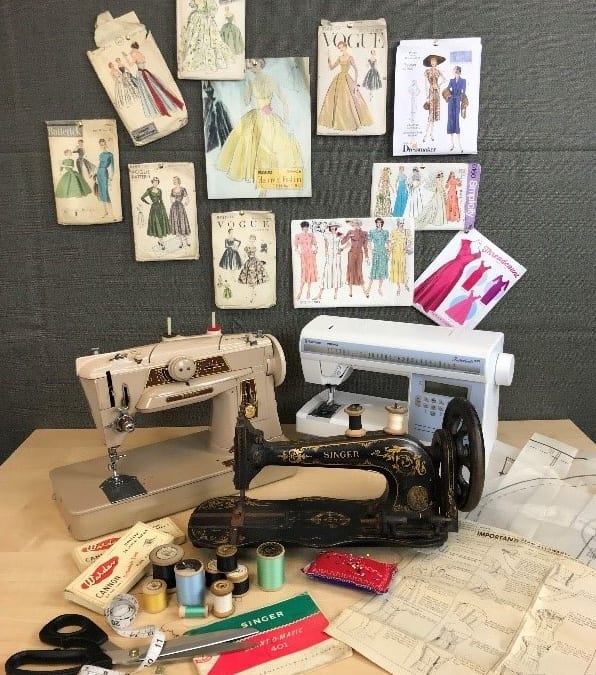 Which sewing course is for me? Tutor Gill McBride talks through the different options 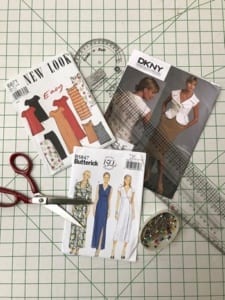 Sewing holidays are quite new at Gartmore House, but everyone who has come so far has loved them! Its such a treat to come to a wonderful place, be able to sew all day for 4 full days, be fed and treated as very special guests and not have to make the beds, think about dinner, or walk the dogs!
Our sewing holidays suit most sewers and will especially suit you if you are confident about using your sewing machine. You will pick up wee sewing tips as you go through each day and you will learn new techniques as well.
On the ‘Understanding and Fitting Patterns’ holiday, we spend a lot of time actually finding out all about the pattern – what’s in it and what information it is giving us. It’s amazing how much we don’t know about the pattern and even the pattern envelope. You’ll also learn how to take body measurements and then choose the correct size of pattern to cut before you even begin sewing. Everyone agrees that this is incredibly useful and informative.
By the end of the holiday, you should have made a toile or a practice dress/top in calico or some other practice material that you bring along, learned all about fitting it on you – with the help of everyone else on the course – and made your pattern adjustments. Many of you will manage to finish sewing your final dress/top before you leave. 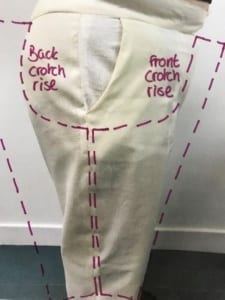 The ‘Trousers’ week is great! How many times do we wish we could get a perfectly fitting pair of trousers and better still, MAKE the perfect pair of trousers. This is the holiday for you! You’ll get to grips with the pattern and hopefully really understand all about fitting those trousers. Crotch depths and crotch rise and all the terms used about trousers can be so confusing but we get them sorted out during this week, having lots of fun and laughs whilst we do it! 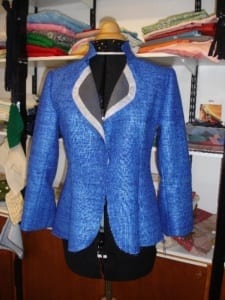 Other holidays that are planned include Speed Tailoring a Jacket. This holiday will suit intermediate and confident sewers to get the best from the holiday. It takes 3 full days to make a wonderful jacket for an experienced sewer but this course will get you to the point where you can take your jacket home and finish your hems and buttonholes etc. Its amazingly satisfying to fit and make your own jackets!
Each workshop will accommodate everyone who comes and Gill will work with all of you individually, ensuring that you get the best of attention and help when you need it. You will learn lots of sewing tips from Gill and from each other and your sewing knowledge and confidence will grow considerably. Hopefully you will go home ready to start a new project knowing that you will be able to finish it and be proud to wear it!  Other sewing topics can be included in a holiday – just get in touch and let us know what you want to learn. 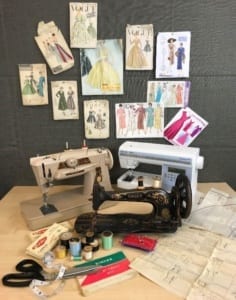 Learn to sew at Gartmore House

For further information about our sewing courses, see our website, or simply pick up the phone and give us a call on 01877 382991. We look forward to hearing from you!
Sew Your Own Courses
Learn to Sew
Understanding Sewing Patterns